Matt Higgs, Sales Director and Co-Owner of Kloeber talks us through the Amazing Spaces project and how he and Max worked together from the planning stage to completion:

When I received a Twitter message in April 2015 from Designer, Upcycler, Entrepreneur and TV Presenter Max McMurdo that simply said “Fancy being part of our new project?! : )” how could I turn this down!? Then began the journey that culminated in much more than just supplying some doors. Along the way myself and some of my partners at Kloeber became much more involved and NO ONE could accuse us of not getting our hands dirty for the customer!

The first time I saw this container it looked very dark, very thin and not very homely at all but I trusted his vision and together we came up with a glazing design that would span across the whole front of the container letting in the light and opening the living space up to the outside.

I went away and prepared some 3D drawings for approval which were to become the final design. The container would then be cut open and steelwork put in place to receive the frames for the two large aluminium ‘Kustomfold’ folding sliding doors.

The doors would open from the centre, one set to the left and one to the right, they would be finished in anthracite grey with black ironmongery for a really slick and contemporary look. The steel post between the two sets of doors also needed bespoke aluminium pressings to cover it and another pressed aluminium piece was to sit over the head of the doors ensuring complete robustness from the weather.

The doors were to be fitted into the container at Reestore’s (Max’s Upcycling company) HQ in Sandy which isn’t far from Kloeber’s Head office in Cambridgeshire, then craned on to a lorry for transporting to Priory Marina in Bedford where it would stay as Max’s new floating home.

Kloeber have installed bifold doors in to a number of temporary buildings and structures that are different from a normal masonry build, however the thought of the container being lifted on to a lorry with most of one side cut out concerned me a little!

After a further couple of visits to measure up and discuss floor levels and frame positioning the finer details were all finalised and in mid-August we arrived at Reestore to install the doors. The internal structure of the build was progressing and by this time there was a floor and the beginnings of a bedroom, bathroom and kitchen, already you could get a good impression of how the finished project would look. The installation went without a hitch and the doors transformed the space. 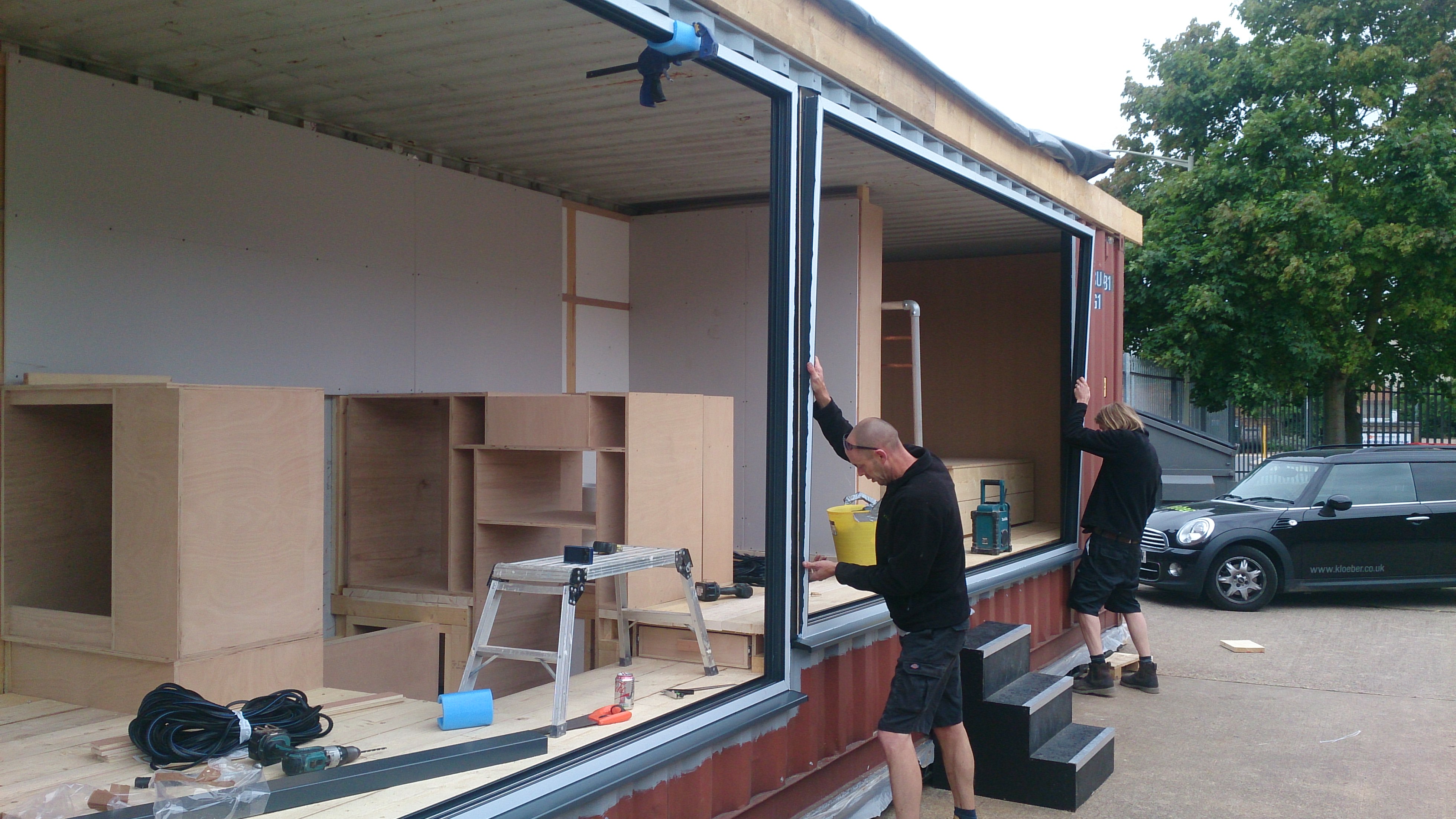 The end of September approached and the day arrived when the container had to be lifted and transported to the marina. I had prior commitments so couldn’t make the day but arrived at the marina the following day, this was only a couple of days before the Channel 4 production crew were due to film the final scenes of the one off Amazing Spaces Special.

The site on the marina was a hive of activity with about 15 people busying themselves trying to get the project ready for filming. To say at this point it looked unfinished would be an understatement and more worryingly the steelwork had deflected to the point where the doors would not even close!

Luckily I had one of Kloeber’s most experienced installers with me and the Kustomfold doors we had installed have quite a bit of adjustment, so we got to work and started adjusting the doors. 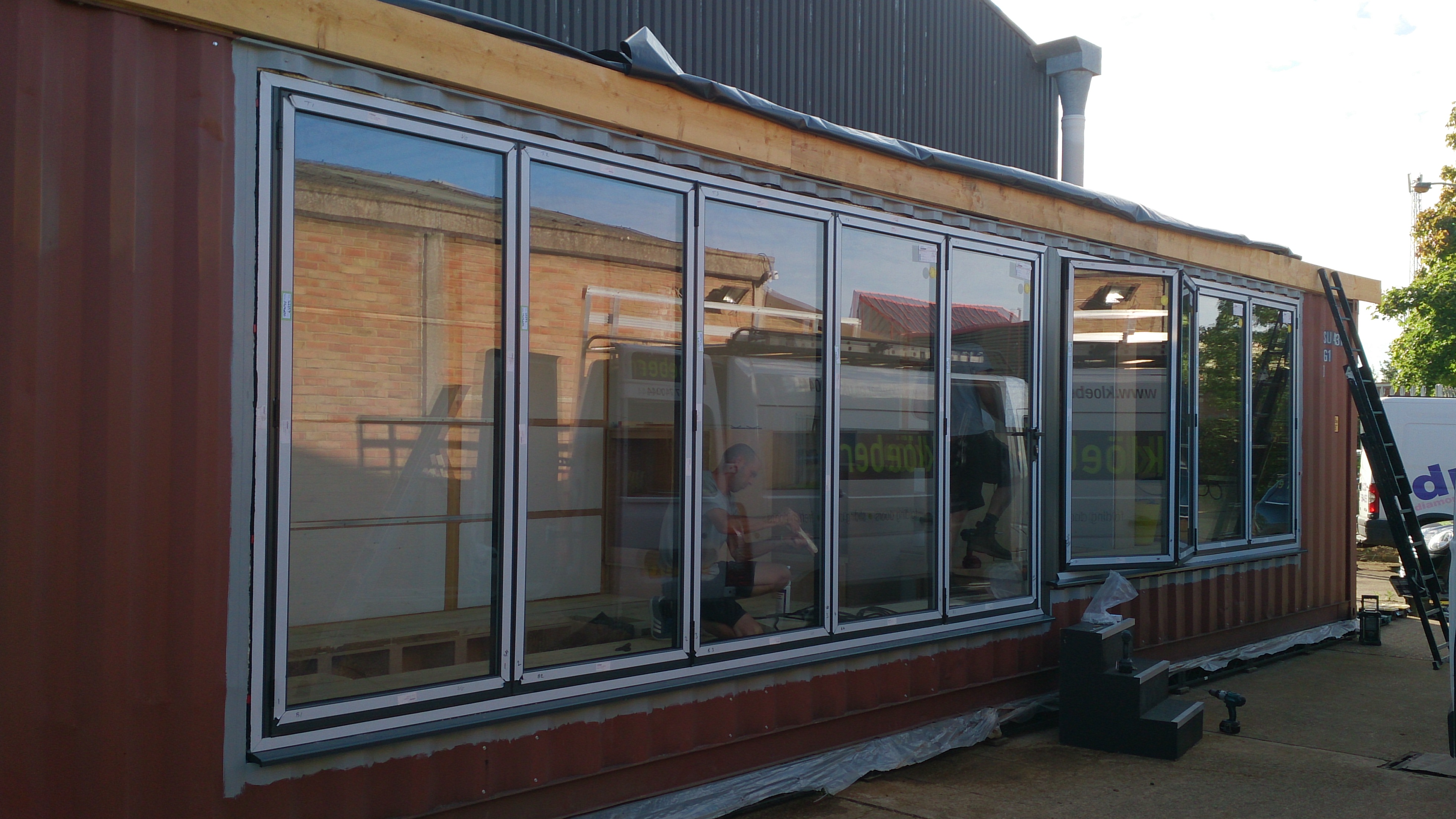 By the time we left a few hours later the doors were running and closing and good enough to be “TV ready”, by now time was really running out. This was Tuesday and If everything wasn’t ready for filming on the Thursday morning the whole Amazing Spaces special was in danger of not happening at all.

On site were a number of Max’s friends with various different levels of skill and experience and a few contractors, most people by this time were working for free to help out which was very inspiring. Despite the doors now working well there was still a lot of work to be done to finish the project off and there was now a real sense on site that this may not happen.

I decided to offer my services and returned to site after finishing at the office the day before the shoot. I was still on site at 22:30hrs that night as were many others when residents started to complain. We had to stop, this was Max’s new home and to alienate his new neighbours was not an option, but the project was now very unlikely to be ready for filming the next day. I didn’t want this to happen personally for Max but also for Kloeber as we’d made a fairly big commitment to the project in lieu of the exposure we’d get from it. 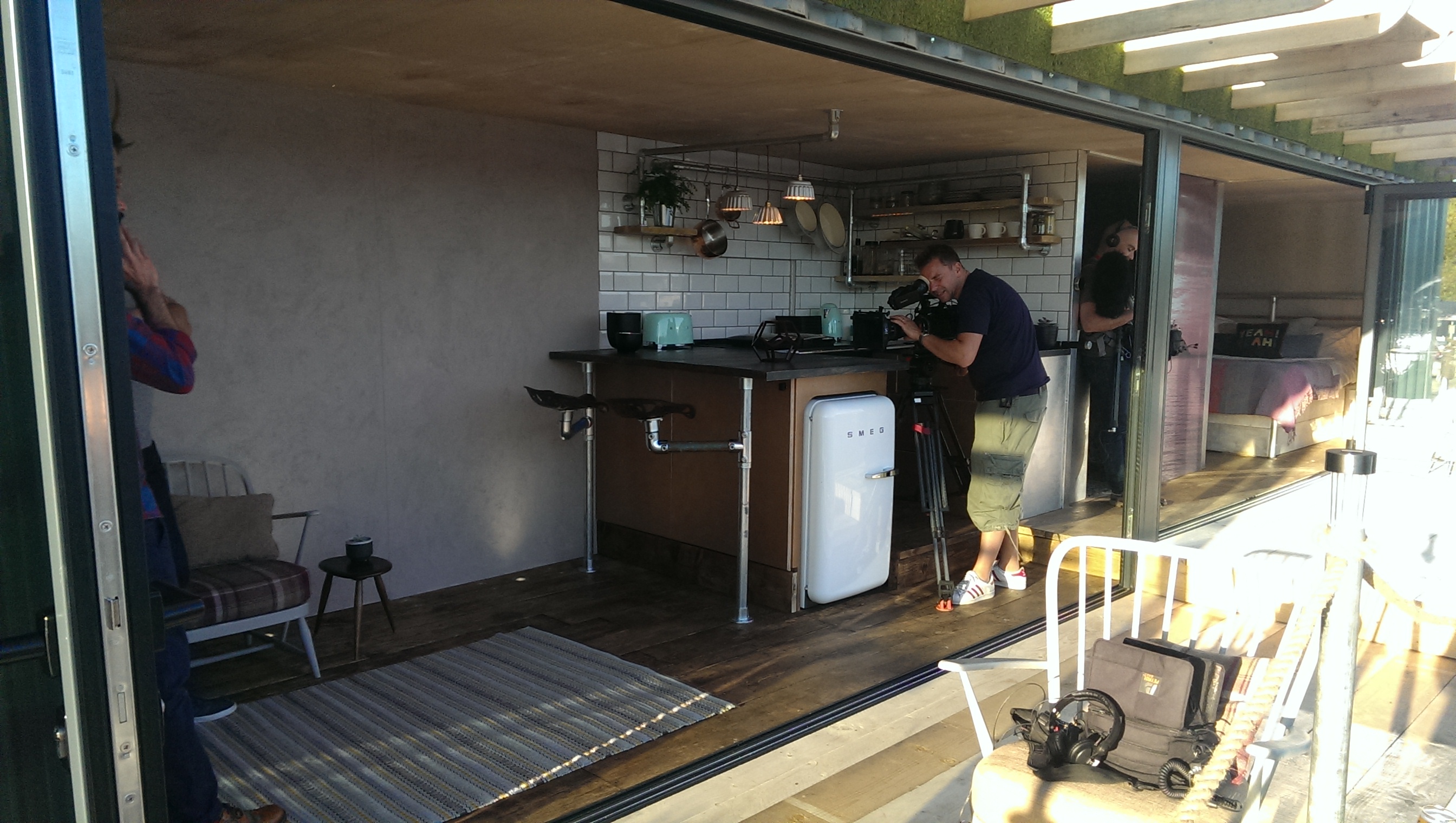 I drafted in a couple of my colleagues for a few hours, Lee (Technichal Director) and Phil (Trade Sales Manager) and we returned to site on the morning of filming determined to do whatever we could to help the rest of the contractors and volunteers who had rallied together to get everything 100% “TV ready”.

We got stuck in and did whatever we could to help out and by the time Lee and Phil left it was looking almost complete. By late morning the film crew had arrived and George Clarke was waiting. With a few last minute jobs done, the decking completed and the doors gleaming clean from the polishing we’d given them, it was ready.

The weather was fantastic that day and perfect for filming, the light was perfect and the filming was all done, the doors looked amazing and were the stars of the show (other than Max and George Clarke!). The wide angle shots filmed with the drone were spectacular and the sense of achievement felt by all involved on the day was immense.

Despite the obvious gains for Kloeber in having media exposure on a high profile job, the extra hours and over and above work were done because at the end of the day this was someone’s home. We always do whatever we can for our customers and on this project we definitely felt we couldn’t have done any more. We’re now working on further projects with Reestore and have cemented a long lasting relationship with Max and the team. 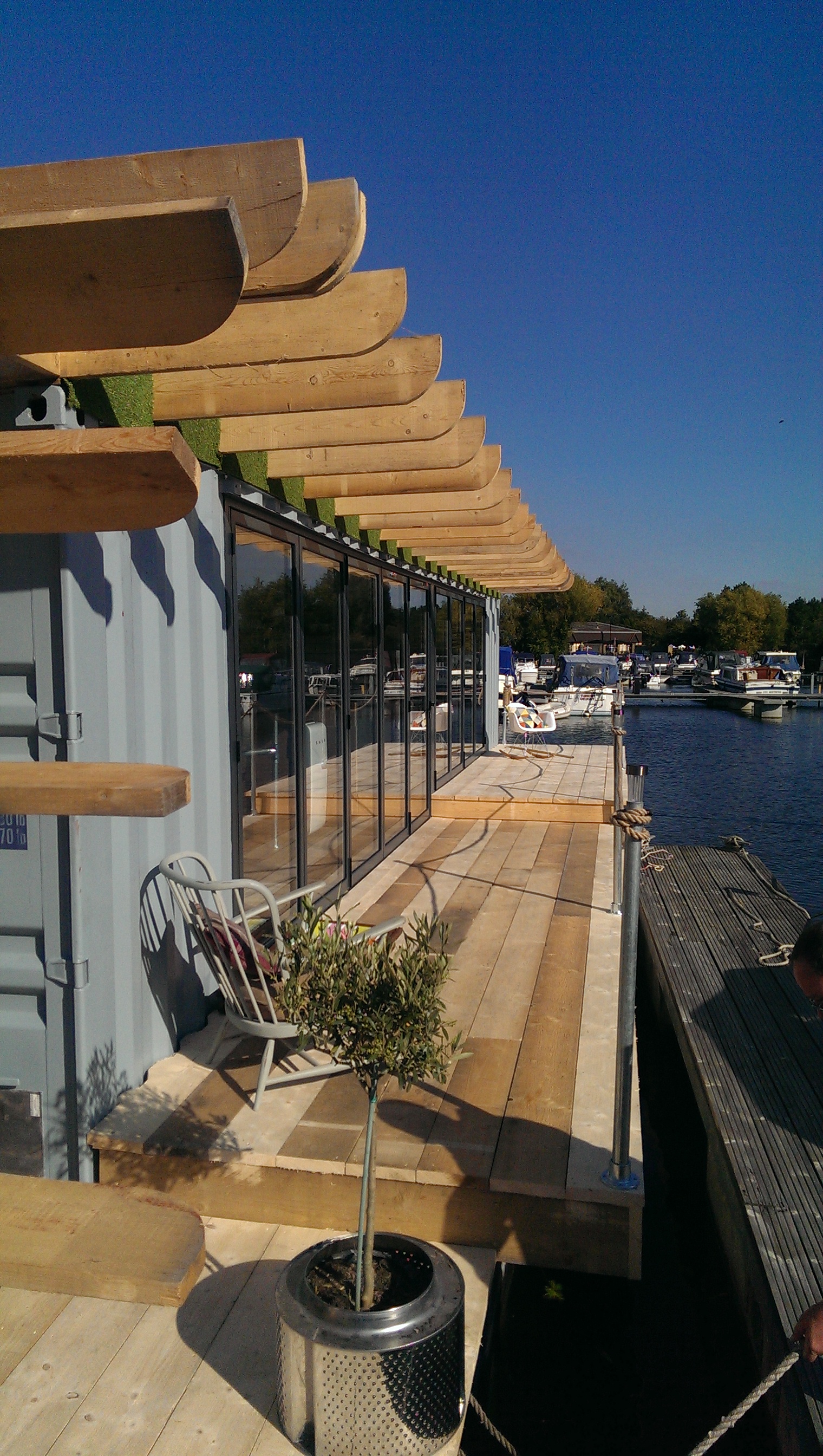 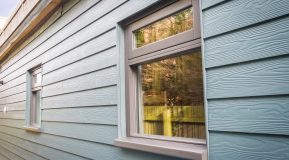 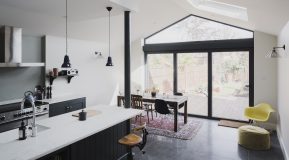 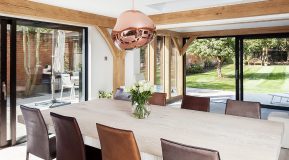 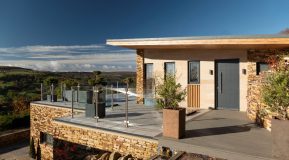 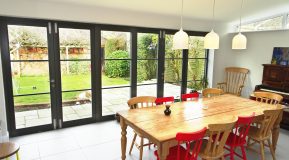